Thanks to the technology of compacting, the material is effective for preventing ice formation and for simplifying measures for cleaning up the territory from the formed ice cover. DEICE MIX BLUE granules are quickly incorporated into the work, penetrating, like a thermal drill, through the formed ice, destroying its connection with the surface to be cleaned.

DEICE MIX BLUE is a system in which two anti-ice components are combined in an ideal proportion: anhydrous calcium chloride (CaCl2) and evaporated sodium chloride (NaCl). These components are the first helpers in the fight against ice, snow and ice. Each individually destroys the ice (acting in different temperature regimes). The main difference of the DEICE MIX BLUE clever anti-ice reagent from any mechanical mixtures is that in each granule of the substance all the constituent ingredients are contained. By combining them together, a unique high effective product with a synergistic effect.

In one granule of the reagent there are heat-releasing calcium chloride (CaCl2) and heat-absorbing sodium chloride (NaCl). This makes it possible to obtain an effect that greatly exceeds the strength of the action of the individual components. Thanks to its compact formula Clever DEICE MIX BLUE knows how to act in this or that situation:

Differences DEIX MIX BLUE from other anti-ice materials: The melting rate of ice is 3-5 times higher than that of salt, the consumption is 40-75% less, and the operating temperature range is extended to -250C.

DEICE MIX BLUE is supplied in 25 kg polypropylene valve bags. This packaging is the best option for packing, transporting and storing deicing materials.

The guaranteed shelf life of DEICE MIX BLUE anti-icing material is 18 months from the bottom of manufacture, provided that the manufacturer's packaging is kept tight.

The anti-icing material DEICE MIX BLUE is fire and explosion proof, does not form toxic compounds in the air and wastewater in the presence of other substances, and does not accumulate in the body. 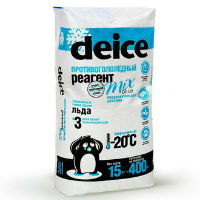 Thanks to the technology of compacting, the material is effective for preventing ice formation and f..