Magnesium chloride is a highly effective solid reagent in granules that is used to fight ice with low temperature conditions - up to - 35 C. Used to destroy ice and snow. As a result of the reaction with snow, it melts. Bishofite - crystalline salt, which was formed by sea vapors. Bischofite is extracted by extraction from wells with a depth of 900 to 4 km. Bischofite is one of the unique minerals, which by its properties and composition far exceeds the oceanic salt and  salt of the Dead Sea. Bishofite is incredibly rich in its composition it consist of 65 elements of the periodic table, such as iron, calcium, zinc, potassium, sodium, iodine, iron and others.

Magnesium chloride is used by municipal economy to fight ice on roads and courtyards.

COMMODITY AND PACKAGING
Anti-ice reagent Bischofite is white crystals and granules that are highly soluble in water. PGM Bishofit is packed in accordance with the current regulatory documentation in special soft containers weighing 1.0 t or bags of 25 kg.

PGM Bishofit is transported by any mode of transport in accordance with the rules for the carriage of goods that operate on this type of transport. PGM Bishofit stored in a warehouse of technical salt, which is a covered storage room, eliminating moisture. Storage is carried out in special soft containers (QMS) or bags. The site where bags or soft containers are stored must be cleaned of protrusions and sharp objects. The temperature regime during transportation and storage of the PGM Bischofite is unlimited. PGM Bishofit can be stored in a warehouse without losing its physical and chemical properties for one year, with all transport and storage conditions strictly observed. Loading and unloading of the reagent is carried out using special equipment, standard for these types of work (forklift, crane, etc.) The loading of Bischofit PGM into special vehicles for spraying the reagents is carried out as follows: the forklift lifts the QMS over the bunker of the car, and then by opening the valve or the cut of the bottom, the QMS falls asleep into the bunker of the BISHOFIT car. Thus, the need for the design and construction of intermediate bunkers and trestles for storage of reagents disappears.

PGM Bishofit is not a substitute for salt in a sandy-salt mix; it does not require joint storage with sand, gravel and rubble. This product is ready for use without any impurities. Using by the enterprises of the housing and communal services of the PGM Bischofit instead of the sand and salt mixture is most effective when interacting with the weather services and clear execution of the complex of works in accordance to technological regulations for winter snow removal. The main things that should be considered before using the Bischofit BMSP:

- special cars must be equipped with a sprayer with the function of adjusting the flow of SGM, t. the consumption rate of the Bischofite PGM is considerably less than the sand-salt mixture;

- It is recommended to protect bunkers of special cars from atmospheric precipitation (the use of an awning is possible);

- It is recommended to follow the norms of the using Bischofite PGM, depending on the temperature and thickness of the ice and snow layer.

PGM Bishofit is designed to combat winter ice on highways, roads, sidewalks and economic areas (garages, parking lots, etc.). PGM Bishofit provides the opportunity to maintain the road surface without ice, ensuring reliable grip of tires with hard surface roads. The main requirement for the use of Bischofit FMG to remove snow and ice is the uniform distribution of the coating required by its quantity on the surface. It is recommended for use during snowfall at low temperatures and on roads with high traffic intensity with mandatory preliminary mechanical cleaning.

ATTENTION: The main purpose of any PGM is to prevent ice and the destruction of  already formed bonds (frost) between the ice and the road surface. Therefore, the optimal effect is precautionary treatment of road surfaces before the beginning of precipitation and mechanical cleaning of areas from snow cover during precipitation, before subsequent deposition of anti-ice materials. (See the Note)

In case of warning from the meteorological service about possible ice, the processing of the roadway, overpass, and bridge structures must be carried out before the precipitation begins. In this case, follow the recommendations given in Table 1. In case of prolonged precipitation (within 4-6 hours), it is necessary to remove the thawing (friable) mass by mechanized means and repack BHMB Bishofit to the cleaned road surface with the reagent consumption in accordance with Table 1. This procedure is recommended to be carried out every 4-6 hours (in case of prolonged precipitation).

REMOVING OF ICE AND GLASS ICE


The above optimal values ​​of the Bischofit FMM distribution norms are calculated to eliminate ice on 1 m2 of the road, if the ice cover thickness in this area does not exceed 1 mm use of metering and spreading equipment. When the thickness of the snow-ice cover, which exceeds 1 mm, the spray rate is increased from the actual thickness. In this case, spraying is carried out in two or more steps. In the case of manual distribution of material, these norms may be increased. In this case, the general norm is the consumption of material from 30 to 140 g / m2.

ATTENTION: None of the known anti-ice reagents is designed for independent and complete utilization of heavy precipitation, in the form of loose snow. It provides the conditions for removing ice or snowing in combination with mechanical cleaning.

PGM Bishofit is fire and explosion-proof. In the air, soil and stagnant waters, with the presence of other substances or factors does not form toxic compounds. In accordance with GOST 12.1.007 PGM Bischofit refers to substances moderately safe (3rd class of safety) and has a moderate effect on the skin, mucous membranes of the upper respiratory tract and human eyes. This reagent does not have a sensitizing and skin-restorative effect. No cumulative activity was detected. In direct contact with Bishophit FMG there is no need for special security measures. The use of personal protective equipment (for example: protective glasses, respirator) depends on the specific work. When working with PGM it is recommended to use rubber gloves. When Bischofite is dispensed with unprotected hands, at the end of work, it is necessary to thoroughly wash your hands.

Attention: A feature of any kind of anti-ice salts is their high hygroscopicity, i.e. property of the material to absorb water from the air. Therefore, the "Bischofit" PGM must be stored hermetically packed, until it is used and packed tightly the remainders of the material, after opening and partial use. Keep away from foodstuffs and children. Protect from moisture! 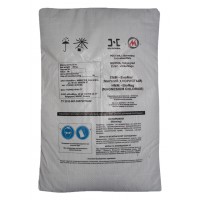 Magnesium chloride is a highly effective solid reagent in granules that is used to fight ice with lo..