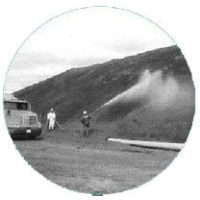 "Development and introduction of technology of stabilization and de-dusting of gravel roads with the..