Technical Sodium formiate is explosive and non-combustible, however, in places of storage and work with it, smoking and the use of open fire should be prohibited, as regards the degree of exposure to the body, it refers to substances of the 3rd class of danger. When working with sodium formate, individual protective equipment should be used - a bathrobe, a rubber glove respirator. In emergency situations, a gas mask A or M should be used. 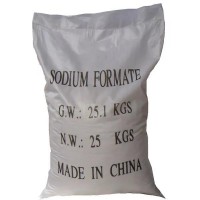